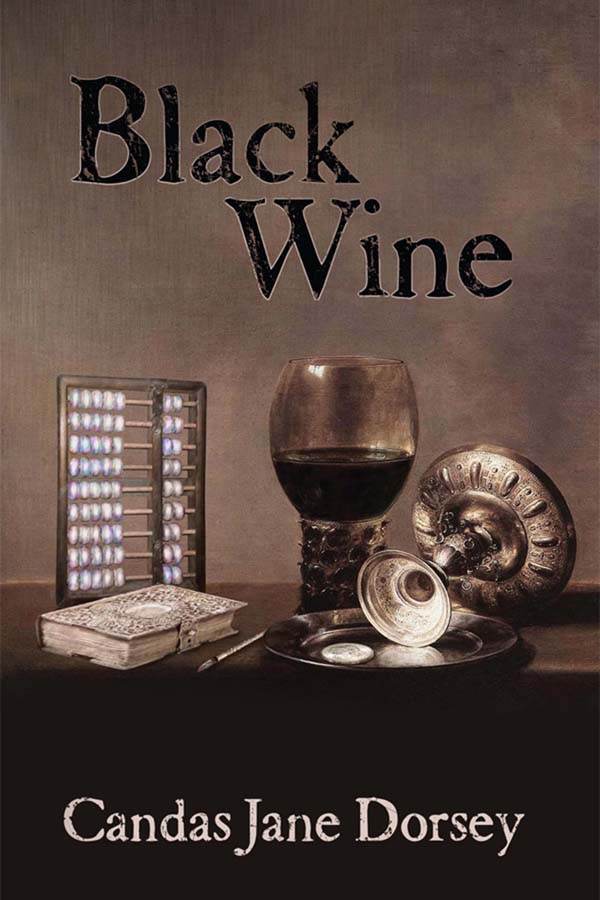 Candas is a Renaissance Woman. She writes both poetry and fiction, both mainstream and speculative, in long and short form. She's written television and stage scripts, magazine and newspaper articles, and reviews. She teaches and delivers writing workshops, is active in arts journalism and advocacy, has served on the executive board of the Writers Guild of Alberta, and was editor-in-chief of The Books Collective for over a decade. So, yeah—Renaissance Woman. She's also been a friend since I started writing. Along with the 1998 Aurora Award for best novel, Black Wine also won the James Tiptree Jr. Award and the Crawford Award.

An old woman hangs in a cage; a young woman slaves on a rich lord's estate. How does a woman discover and assert her identity in a primeval, barbaric world? From slave dens to merchant cities to isolated mountains, Candas's first novel is a powerful exploration of gender, identity, and freedom. 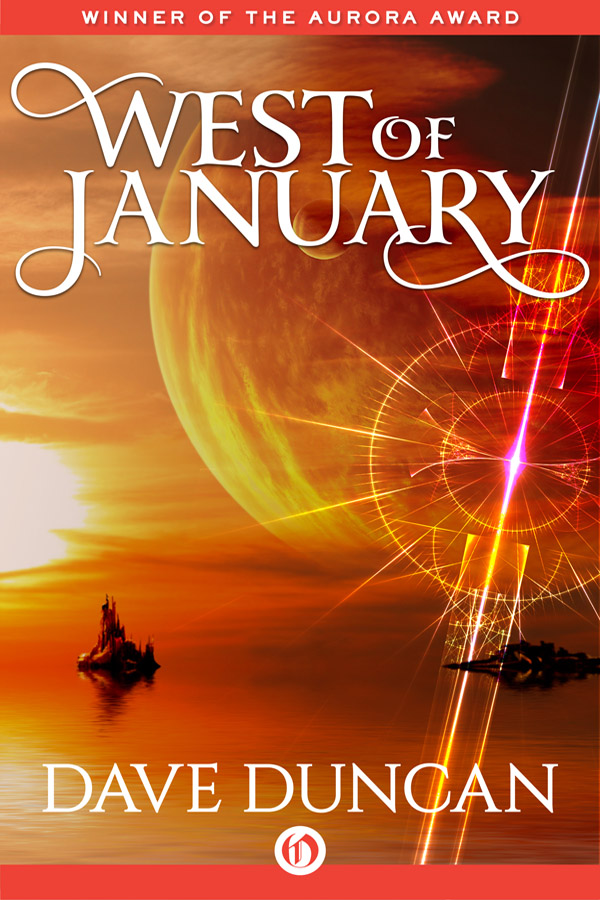 Next up in my spotlight series on books in the excellent Aurora Award ebook bundle is Dave Duncan's West of January.

Shortly after I started writing professionally, I sat on my first panel at a genre convention, an unknown among established pros. One of my fellow panelists was Dave Duncan, and I still remember his gracious welcome to a newbie. Dave is an international best seller and an acknowledged master of epic fantasy and science fiction, with fifty novels and over a dozen series. Last year, Dave was inducted into the Canadian Science Fiction & Fantasy Association Hall of Fame. West of January is a standalone SF novel and a great introduction to his work. It also represents the earliest Aurora Award winner in this bundle, and I'm thrilled to be able to include it.

I blogged yesterday about the excellent ebook bundle of Aurora Award winners and finalists that  I'm curating. Over coming days, I'll highlight the individual books in the bundle, to give you a better idea of what you get with this package. Today, I'm picking Starplex by Robert J. Sawyer.

When I was putting this bundle together, I knew that I not only wanted to include a Robert J. Sawyer title, but that I had to. Rob has won the Aurora Award fourteen times, with another thirty final ballot appearances, more than any other Canadian writer. Rob is one of only eight writers in history — and the only Canadian — to win all three of the world's top Science Fiction awards for best novel of the year: Hugo, Nebula, and John W. Campbell Memorial Award. In 2013, Rob was also inducted into the Canadian Science Fiction and Fantasy Association Hall of Fame.

And personally, Rob was a mentor to me and gave me my very first professional sale when he and his wife, the poet Carolyn Clink, edited the Canadian anthology, Tesseracts6. Starplex was my introduction to Rob's writing and remains one of my favourites.

Starplex takes you onboard a giant exploration starship crewed by humans, dolphins, and extraterrestrials as it embarks on a journey covering billions of years of time and millions of light-years of space. It was also a finalist for both the Hugo and Nebula awards. Here are some selected reviews:

How would you like to own, at an incredible bargain, ten books that readers like yourself have already voted to be the best examples of speculative fiction by Canadian writers? Well, here's your chance. I'm curating an ebook bundle for StoryBundle.com that contains winners and finalists for Canada's premier speculative fiction award, the Aurora Award.

The Auroras are awarded annually by the Canadian Science Fiction & Fantasy Association (CSFFA) for excellence in Science Fiction and Fantasy. The award started in 1980 as the Casper and was renamed the Aurora for the 1990 awards. Auroras now include eight professional categories and four fan categories. I'm honoured to have won the Aurora three times and to have been on the final ballot another sixteen.

One of my goals when putting this bundle together, aside from offering the best books possible, was to have a gender balance in the selected authors. Mission accomplished. The bundle includes five female and five male authors. You'll also get a great mix of SF and fantasy, adult and YA novels, as well as a selection of short fiction. The bundle also reflects the long history of the Auroras, with titles spanning over twenty years of Canadian speculative fiction. Here's what you'll get in the bundle...

Kobo is running a special sale from Jan. 28-31 in Canada, United States, Australia, New Zealand, and the United Kingdom. You can save 50% on any Kobo title using the promo code JAN1650 an unlimited number of times.

Yes, that's *any* title. But in case you want to pick up any of mine for half-price, here are some links:

The Wolf at the End of the World: http://store.kobobooks.com/en-CA/ebook/the-wolf-at-the-end-of-the-world

Kobo is running a "Buy 2 ebooks, Get 1 free" promotion from Jan 15 until Feb 1. I'm happy to say that they've included three of my books in the promotion: The Wolf at the End of the World, Chimerascope, and Impossibilia.

There are different links for each territory where the promotion is being offered.

Yeah, okay. I'm a tad late posting this. The Toronto SF&F convention, SFContario, started tonight at the Ramada Plaza Hotel, 300 Jarvis St, Toronto. I'm doing a bunch of panels, one reading, giving a workshop on marketing and selling short fiction, and also will be one of the presenters at the Aurora Awards ceremony.

I hope to see you there.

"The Walker of the Shifting Borderland" published in Estonia 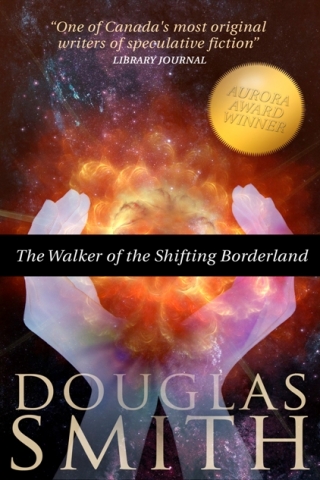 My short story "The Walker of the Shifting Borderland," which won Canada's Aurora Award in 2013, has been translated and reprinted in the Estonian magazine, Reaktor. That is the thirty-second country and twenty-sixth language in which my work has been published. If you can read Estonian, you can check out the story here.

For the rest of you, you can get the ebook edition of the story, complete with the awesome cover art by award winning artist, Erik Mohr, in my bookstore here.

What's more, I'm offering the ebook FREE to the first five people. Just go to the bookstore link and use the coupon code FREEWALKER at checkout.

Sale on IMPOSSIBILIA at Kobo this weekend only 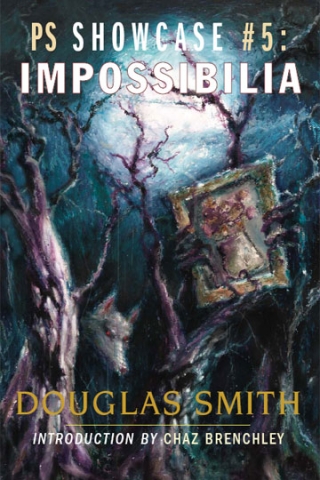 Kobo is running a 30% off sale this weekend and is including my Aurora-award nominated collection, IMPOSSIBILIA, in the SF&F titles. IMPOSSIBILIA contains an Aurora Award winner ("Spirit Dance," the prequel story to THE WOLF AT THE END OF THE WORLD) and an Aurora finalist ("Bouquet of Flowers in a Vase, by van Gogh"). Use code OCT30 on checkout. Buying link is here.

It's not Halloween without MONSTERS!!! 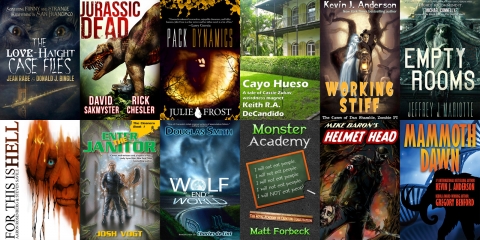 I'm pleased to announce that I'm part of an exciting new ebook bundle of great stories all of which feature some sort of monster. Just in time for you to get your scare fix for Halloween!

Best-selling author, Kevin J. Anderson, has curated the MONSTERS ebook bundle for Storybundle, and he's put together a great lineup. You can read more on Kevin's blog here or go right to the Monster ebook bundle on the Storybundle site to check out this excellent set of titles.

Here's how the bundle works:

Storybundles are great deals. Buy this for yourself or get some early holiday presents for friends and family, all at an incredibly low price. Great books, great price. What's not to like? This bundle is available for three weeks only, from October 15 until November 6 at midnight, so don't delay.

Thanks for the support!