"Scream Angel" to appear in "best of" Circus anthology: Fantasy Under the Big Top 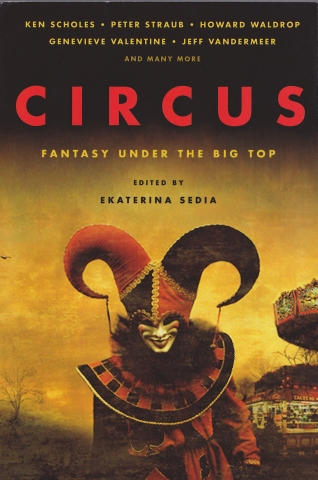 My award-winning novelette, "Scream Angel," will appear in the reprint anthology, Circus: Fantasy Under the Big Top, which will feature the best circus-themed stories that editor Ekatarina Sedia could find. Check out the draft cover to the left and the table of contents below. I'm thrilled to see my little tale in the company of stories by such a fine list of authors.

"Scream Angel" first appeared in the anthology Low Port, edited by Sharon Lee and Steve Miller (Meisha Merlin, 2003) and won the Aurora Award for best short fiction in 2004. It's included in my collection, Chimerascope. Check out its full publication history and reviews, or buy an ebook copy of the story.

In honour of this announcement, this week's free ebook is "Scream Angel." The coupon code is SCREAM-ANGEL-FREE. To use the coupon, click on the cover at the right (or go to my bookstore, click on the ebook section, and select "Scream Angel") and enter the code in the coupon box on the order page. This coupon will be valid only for the first ten people who use it. If you're late reading this and you find that coupon has expired, you can always use one of the coupons on my specials page. "Scream Angel" won the Aurora Award in 2004 for best short fiction and first appeared in the anthology, Low Port. It is included in my collection, Chimerascope, which is a current finalist for the 2011 Aurora and 2011 Sunburst Awards. Enjoy!

My novelette "Scream Angel," which won the Aurora Award in 2004 for best short fiction, has been selected for the annual FantAstika 2010-2011 Almanac by the Human Library Foundation in Bulgaria. "Scream Angel" was first published in Bulgarian in the magazine,Terra Fantastika, in 2005 (see cover at left).

The story will be one of twelve stories included in the almanac, along with about thirty pieces of non-fiction. The FantAstika Almanac is "an annual 400-page publication dedicated to interesting (and possibly human-evolving) events in SF, mostly in Bulgaria but also around the world." The anthology will be published in both print and ebook formats.

This marks the fourteenth sale for "Scream Angel" and its eleventh translation.

"Scream Angel" in premiere issue of Hyperpulp in Brazil

My story "Scream Angel," which won the Aurora Award in 2004, has just been translated into Portuguese and reprinted in the premiere issue of the new Brazilian speculative fiction magazine, Hyperpulp, edited by Alexandre Mandarino. The cover looks gorgeous, and I'm proud to be part of the launch of a new genre magazine. An early review described "Scream Angel" as "a true pearl of fantastic literature. Breath-taking." This is the thirteenth publication for "Scream Angel," and its tenth language. It remains one of my own favourite stories, and it's good to see that it still has legs (well, actually she has wings...). And if you'd like to read the story in English, here's your chance.