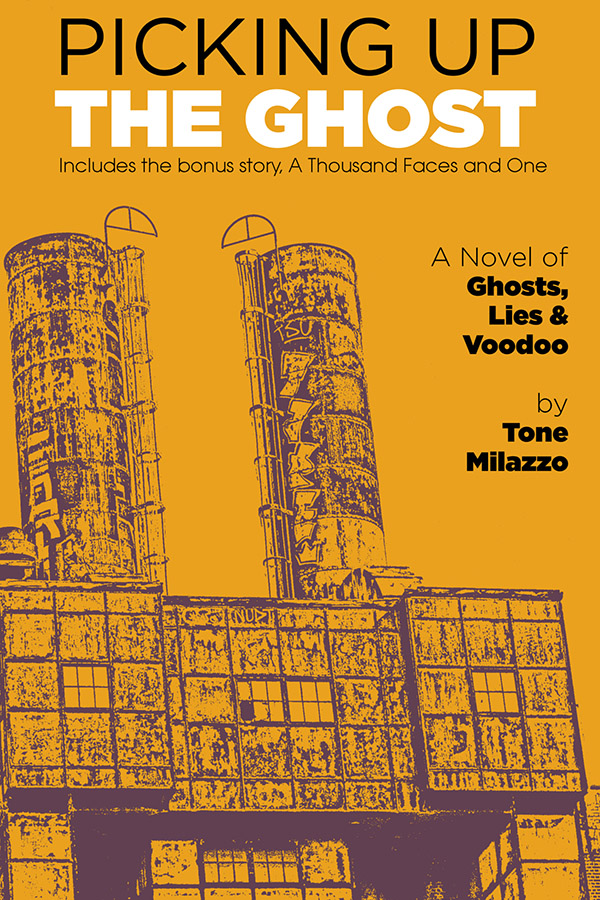 I wrote a few months ago of the project I was putting together to help authors who had books orphaned because of the sudden collapse of ChiZine Publications.

That project is now live in the form of the new *Exclusive* Dark Fantasy & SF Bundle I'm curating for StoryBundle.com. This bundle is a remarkable set of eleven titles by bestselling authors and rising stars. Over the course of the bundle, I'm posting interviews here with each of the bundle authors. Well, except for me, because that would be weird.

Today we get to meet Tone Milazzo.

I first met Tone in 2012 at a room party at the World Fantasy convention in Toronto, shortly after he had become a fellow ChiZine author with the release of Picking Up the Ghost (which is featured in the bundle).

My first impressions, hazed no doubt by eight years of passing time were, more or less in order: he's very tall, scary smart, and looks at the world from a slightly different angle than most people—no doubt why he's such an impressive writer and why I was thrilled to include Picking up the Ghost in this bundle.

I also remember that, somewhere over the course of that World Fantasy party, he helped answer the age-old question: how many authors can you fit into one of those big bathtubs in a hotel suite? The answer is ten (we all were fully clothed). And yes, I have pictures.

Doug: What is your writing Kryptonite?

Tone: Marketing. As authors we’re all expected to self-market our books and I can’t say that anything I’ve tried has worked. Still trying though...

Tone: Religion and mental disorders. Particularly in Picking Up the Ghost, Cinque is a neophyte shaman who possesses schizotypal personality disorder, a form of schizophrenia.

I’d come across an article comparing the behaviors of people with schizophrenia in the US versus in Africa. In the US, their hallucinations took the form of paranoid delusions. ‘The government is watching me’ being a common example.

But in Africa, people with schizophrenia tended to fall back on their traditional belief systems and often ended up as shaman. There’s a strong correlation between schizophrenic behavior and shamanistic beliefs; magical thinking, hallucinatory beings, peculiar speech patterns, and on.

Perhaps, if we had such a social structure in the West, one where people with schizophrenia felt like they belonged, they’d have less anxiety associated with their conditions.

Doug: What did you edit out of this book?

Tone: The whole second half. My initial group of three beta readers didn’t agree on everything, but they all agreed that bringing Cinque out of the real world and into an empty world with just him and the spirits was a mistake.

I’d underestimated how much the readers liked Cinque’s family and the rest of the supporting cast. Taking him into another world like that meant starting over with a new supporting cast that had no particular relationship with Cinque.

So I bit the bullet and started again from page 180.

Tone: Table top role-playing game design. Maybe not so much the rules themselves (there are enough RPG rules out there) but setting books and adventures for existing systems.

I’ve written an RPG based on all the world building I did for my second novel, The Faith Machine, a psychic espionage thriller. My agent had me write outlines for two sequels so she could try to sell it as “a stand-alone novel with series potential.” That’s two more sets of adversaries, supporting casts, and settings. Plus all the notes I have on other story elements that haven’t found a home yet.

It was so easy to pour all of that into a setting book for an existing rules-set called the Fate system. It only took two weeks, and during the process or organizing all this information, I discovered a number of inconsistencies and discontinuities to fix.

Doug: What is the most difficult part of your artistic process?

Thanks, Tone! Check out Picking Up the Ghost by picking up (see what I did there?) the *Exclusive* Dark Fantasy & SF Bundle from StoryBundle.com before it disappears on September 9.