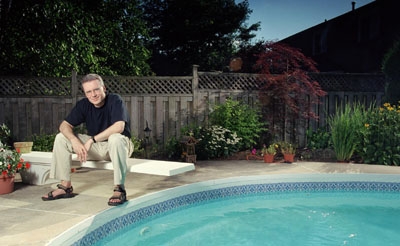 "Writing was my way of dealing with my mid-life crisis. Most guys my age are playing golf and trying to lower their handicaps, and I'm trying to tell stories. I have all these ideas in my head, more ideas than I have time to write about, and the only way to exorcise them out of my consciousness is to write them into a story. Otherwise, they'll be up there bugging me.

"Since I have a full-time executive job at a consulting firm, I'm still developing a writing regimen. You have to learn to be able to write whenever time comes up. If you've got ten minutes on the train, grab it. If you get one paragraph done, then that's one paragraph more than you had before. You can't wait until you get three hours or a day off to write, because you're not going to get it. I've got a job and a family and two kids, so there's always going to be something else for me to do.

"Science fiction was something I'd always enjoyed, and I think it gives you a broader canvas to write on. For example, I'm concerned about the continued destruction of our environment, so in 'Spirit Dance,' I introduced several races of shape-shifters. Each race was tied to a species of animal who served as a totem for that race. And as the animals become endangered it reduces each race's powers and abilities. In sci-fi, you can take a distorted mirror to something -- environmental destruction, population growth -- and say, 'Look, if this continues, this is what might happen.' "

Douglas Smith has been writing science-fiction and fantasy stories since 1995 and has been published in eight countries. He is a finalist for the 2001 John W. Campbell Jr. Award for best new writer, which will be awarded at the World Science Fiction Convention in Philadelphia on September 2.

© 2001 Saturday Night Magazine External sites are not endorsed by saturdaynight.ca.