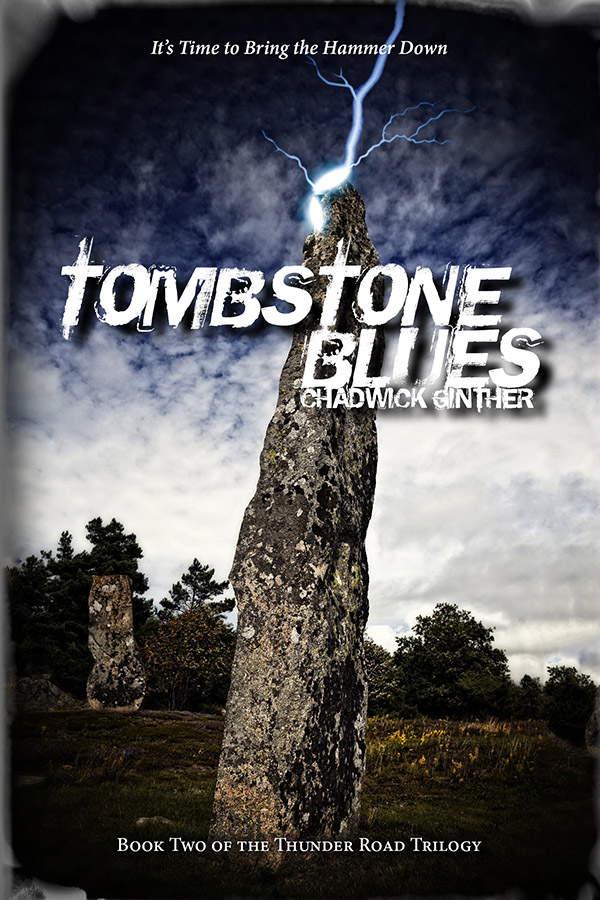 Before we get to Chadwick's interview, just a reminder that this is an *excellent* selection of titles by bestselling authors and rising stars. The bundle is the culmination of a nine-month project to help authors with books orphaned by the sudden collapse of ChiZine Publications in 2019.

Plus you can direct a portion of your bundle purchase to Black Lives Matter (Canada). So here's your chance to help out a critical social cause and to help authors recover from this derailment. Now for that interview.

I will admit to a weakness for Norse mythology and have written a couple of Norse myth stories myself ("The Boys Are Back in Town" and "The Last Ride," both of which are in Chimerascope, also in this bundle).

So, when I had a chance with this project to include not just one, but two titles from Chadwick Ginther's excellent Thunder Road urban fantasy series, I jumped at it.

Tombstone Blues is the second in the trilogy, and if you pick up the bonus titles in this bundle, you'll also get the third book, Too Far Gone. The Thunder Road trilogy is that rare beast—a series that starts out strong, then only gets stronger with each subsequent entry. Come on. Norse gods on the Canadian prairies—what's not to love? Plus, how could you resist a series that takes its titles from Springsteen, Dylan, and Neil Young tunes?

Chadwick: The theme of “found family” is probably the one that crops up the most in my work, often when I don’t plan to include it. It’s definitely present in the Thunder Road trilogy, as Ted Callan leaves his old life behind at the beginning of the series, creating a new, if unintended life and family in the Norse mythological world, but it’s there in Graveyard Mind, and a lot of my short stories too. I was fortunate enough to make some amazing friends during university who’ve become like brothers and sisters, and still play D&D with my old high school group after more than thirty years (to say nothing of my love of the Uncanny X-Men comic books), so it’s no surprise that this theme sneaks into my work.

Doug: What did you edit out of this book?

Chadwick: The excised piece that got closest to publication in Tombstone Blues, while still being cut from the book was a short interlude in Hel (the realm) with Hel (the goddess) and some of her undead valkyrie servants. I really enjoyed the scene on its own, but within the book, it proved to be a bit extraneous and slowed the pacing. In the original draft of Tombstone Blues, a minor character played a much larger role, but in revisions for Thunder Road, I’d punched up Ted and Tilda’s relationship, so Tilda subsumed a lot of that character’s page time. Not a lot ended up cut, but it required alterations to roughly half the book.

In Too Far Gone, there were even more drastic changes from original vision and draft to the final book. I lost the prologue in Iceland (it’s the only book in the series without a prologue) and cut a bunch of scenes featuring other characters’ POV during the climactic final battle. As with the interlude I cut from Tombstone Blues, loved all the scenes individually, but they stole momentum from the story’s ending. The biggest cut though, was jettisoning how I thought the book would end. As I was drafting it, I sensed it wasn’t working, but stubbornly hung on. I had to pitch almost 20,000 words, but the book and the series was better for it. Those cut scenes will hopefully become their own novella someday.

Chadwick: I used to draw a lot before writing became my creative outlet. Mostly it was limited to my characters from roleplaying games, but I think if I hadn’t gotten into prose I probably would’ve tried to become a comic book artist. Comics were what got me into reading, and I still love them today. Those drawing skills have sadly long since atrophied though!

Doug: What was your hardest scene in this book to write?

Chadwick: The hardest scene I had to write in Tombstone Blues is also probably the most difficult scene I’ve ever had to write. However, it’s a pretty big spoiler, so fair warning.

Tilda losing her baby and the aftermath was incredibly tough to write. I’m not a parent. I’ve never lost a child. I do have some generous friends who helped me by sharing their own experiences, and I did a lot of reading to keep it from just being their tragedies transcribed for the page and something that belonged to my characters. I hope I got it right enough.

It may sound a bit maudlin to say, but the hardest thing to write in Too Far Gone was the last scene I needed to finish, which was the final chapter (the epilogue was already done, and I had a blast writing that). The final chapter meant saying goodbye, and the series had been a big part of my life. Still is. I guess I’m not great at goodbyes though, because I keep coming back to the world in short stories and imagining what life might be like for Ted, Tilda, and Loki on the other side of the series.

Doug: What were the early influences on your writing, and how do you think they manifest in your work?

Chadwick: Probably the earliest influences on my writing were my great-great-uncle and my great-great-great-uncle who kept me entertained as a boy with pulpy Lone Ranger and Tarzan stories mixed amongst tales of their time working on the Canadian prairies in their youth. Adventure and the prairie seems to be a mix I can’t shake!

Chris Claremont’s run on Uncanny X-Men made me care about long form storytelling, and Roger Zelazny was the first author that made me say “I wish I could write like that” when I read his Amber books. I think some of Corwin’s earthy personality has infiltrated into the types of protagonists I like to write about—you know, assholes.

More recently, I discovered my love of the Urban Fantasy genre as I began to pursue my own writing career. Authors like Kelley Armstrong, Carrie Vaughn, and Patricia Briggs did a lot to shape how I wanted to create with their excellent long form series.

Thanks, Chadwick! We share the impact that Roger Zelazny's writing had on us. His writing, and specifically his too-early passing, finally convinced me it was time to start chasing the writing dream.

You can pick up Tombstone Blues and Too Far Gone, along with nine other excellent titles, by getting the *Exclusive* Dark Fantasy & SF Bundle from StoryBundle.com before it disappears on September 9.