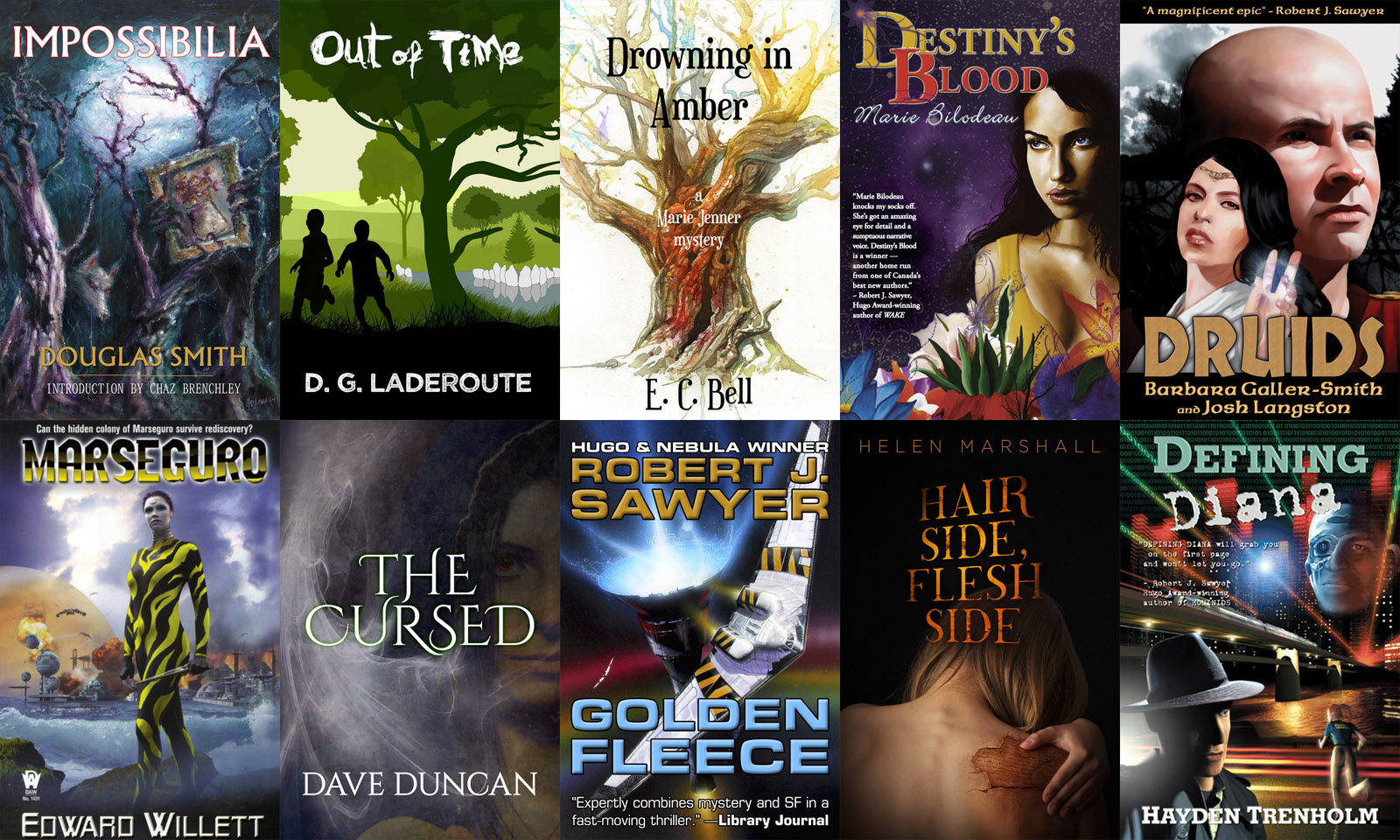 How would you like to own, at an incredible bargain, ten books that readers like yourself have already voted to be the best examples of speculative fiction published in Canada? Well, here's your chance. I'm once again curating an Aurora Award ebook bundle for StoryBundle.com that contains more winners and finalists for Canada's premier speculative fiction award, the Aurora Award. These Aurora bundles will now be an ongoing series on StoryBundle, running twice a year (until we run out of titles!), so they make a great way for you to build your library of the best in Canadian speculative fiction.

The Auroras are awarded annually by the Canadian Science Fiction & Fantasy Association (CSFFA) for excellence in Science Fiction and Fantasy. The award started in 1980 as the Casper and was renamed the Aurora for the 1990 awards. I'm honored to have won the Aurora three times and to have been on the final ballot another sixteen.

This Aurora bundle again delivers a great mix of SF and fantasy, adult and YA novels, as well as a selection of short fiction. The books included reflect the long history of the Auroras, with titles spanning a quarter century of Canadian speculative fiction from 1992 to 2016.

This time, the bundle provides a great introduction to several wonderful series, including the first book in four separate series and the second book in a series that can be read as a stand-alone title. It also lets you sample the rich tradition of Canadian short speculative fiction, with two acclaimed collections.

In Destiny's Blood, Marie Bilodeau delivers action, romance, and mystery in an interstellar SF tale of two sisters fighting to save each other—and all life. And it all begins in a flower shop.

Druids, by Barbara Galler-Smith and Josh Langston, kicks off a magnificent epic historical fantasy trilogy, set a thousand years ago when the Celts ruled Europe.

D.G. Laderoute's Out of Time is a YA fantasy adventure combining time travel with First Nations lore as two fourteen-year-old boys—one white, one Anishinabe—join forces across time to battle a monster.

Dave Duncan's fantasy The Cursed takes place in a fallen empire where a plague leaves its survivors ostracized but with magical powers, powers that might be the key to rebuilding their world.

In Defining Diana, Hayden Trenholm updates the locked room mystery to 2043, where nuclear war, biotechnology, and all-powerful corporations have changed the Earth we know.

Golden Fleece, which was the first novel by Canada's best known SF writer, Robert J. Sawyer, is an SF mystery set on a colony ship as told by the artificial intelligence controlling the ship.

In Ed Willett's Marseguro, modified humans on a distant water world finds themselves in a battle for survival with a future Earth ruled by a fanatical theocracy.

Hair Side, Flesh Side, Helen Marshall's award-winning first collection of short stories, is a brilliant introduction to one of the brightest new lights in Canadian speculative fiction.

Finally, my own collection, Impossibilia, delivers a mix of SF and fantasy, including an Aurora winner, a finalist, and the story prequel to my novel, The Wolf at the End of the World.

And if you are looking for still more pedigree, the bundle includes two CSFFA Hall of Fame inductees (Sawyer and Duncan).

For StoryBundle, you decide what price you want to pay. For $5 (or more, if you feel generous), you'll get the basic bundle of five books in any ebook format worldwide:

If you pay more than the bonus price of just $15, you get all five of the regular titles, plus five more:

The bundle is available for a very limited time only, here at StoryBundle. It allows easy reading on computers, smartphones, and tablets as well as Kindle and other ereaders via file transfer, email, and other methods. You get multiple DRM-free formats (.epub and .mobi) for all books!

Want to give this bundle as a gift? StoryBundle makes it easy with gift cards that allow you to send someone a code that they can redeem for any future StoryBundle bundle – and with timed delivery, which allows you to control exactly when your recipient will get the gift of StoryBundle.

So check out the bundle now. Remember, it's only available until July 27. Enjoy!