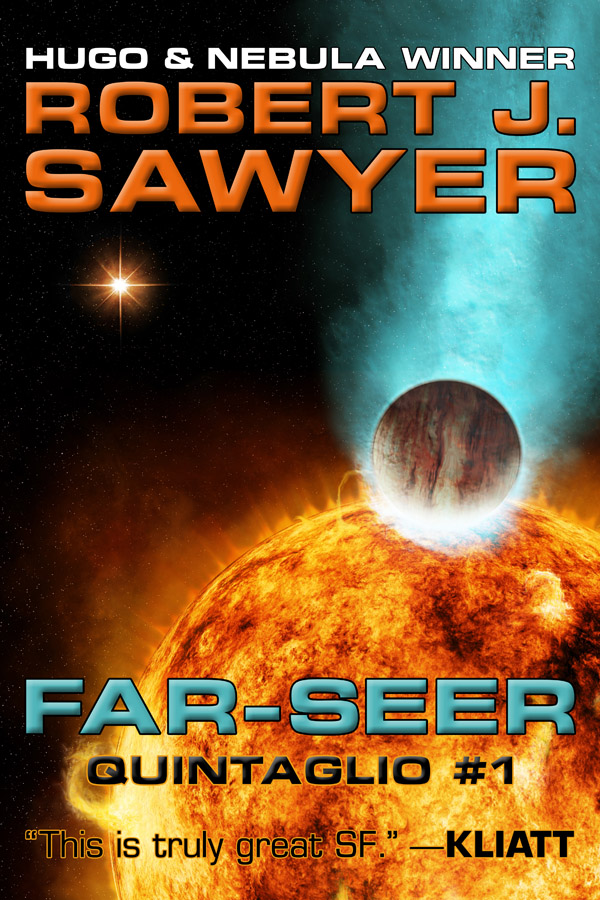 This post wraps up my spotlight series on the current ebook bundle of winners and finalists for Canada's Aurora Award. For this last entry, we have an essay by Canada's Dean of Science Fiction, the multi-award winning, Robert J. Sawyer. In it, Rob discusses how his title in the bundle, Far-Seer, grew from a standalone novel to become the first book in the Quintaglio Ascension trilogy.

(The following essay originally appeared in the premiere issue of The Crystal Tower, the SF newsletter published by New English Library.)

Far-Seer, which is now volume one of the Quintaglio Ascension trilogy, was originally written as a standalone science-fiction novel, and I sent the manuscript to my agent with trepidation. After all, I was asking him to sell a book that had not one single human being in it. Would an audience identify with the characters I'd created?

To my delight, my agent loved Far-Seer — but said that the milieu I'd created deserved an entire series, not just a single book. All well and good — except I hate series, much preferring to write standalone novels. But my agent kept pushing, and so I set about deciding what I would insist upon in creating a series of my own.

First, I told him I would do no more than three books, with a final, conclusive, overall ending. But more than that, each book would be a legitimate standalone novel (as Far-Seer already was), with its own real conclusion, rather than a cliffhanger ending. And I would use a different narrative technique in each novel, so that they would present fresh creative challenges for me.

Far-Seer was the story of Afsan, an intelligent dinosaur who was his race's counterpart of Galileo. For the second book, I decided to tackle a dinosaurian Darwin, and in the third, a saurian Sigmund Freud. And as I had in Far-Seer, I would up the stakes: for Afsan, discovering the true arrangement of the heavens was not just of scientific interest, but rather a life-or-death issue for his entire world. In the second book (eventually entitled Fossil Hunter), I would make the discovery of evolution much more difficult by positing a fossil record that seemed to prove rather than refute divine creation. And in the final volume (Foreigner), I would make psychoanalysis — of Afsan — key to avoiding the extinction of my dinosaurian race.

I'd done things in Far-Seer I never would have if I'd known it was going to be volume one of a series (most notably, I'd blinded one of my principals and made it impossible for my reptilian characters to lie). But I decided not to go back and change those things: they were appropriate for Far-Seer, and I wouldn't dull its edge simply to make the sequels simpler to write.

The Galileo-Darwin-Freud model suggested moving the action ahead by decades between each volume. Getting to revisit characters I'd first portrayed in their youth again at middle age and then near death appealed to me greatly. As for finding a different narrative voice for each book, the extended timeframe took care of that. As The New York Review of Science Fiction noted:

Sawyer evolves his very style of writing across the trilogy — the first a straight linear exposition, the second alternating story lines between chapters, the third deftly juggling four different story lines within each chapter — a strategy which nicely mirrors the writing styles of the linear Renaissance, dialectic 19th century, and the multi-perspectival 20th, or the milieus of Galileo, Darwin, and Freud on Earth.

Looking back on the finished Quintaglio Ascension trilogy, I am indeed glad that my agent twisted my arm this once. But I do wish I could get him to stop talking about what I should do for my next series...

And a short bio for Rob:

Robert J. Sawyer — called "the dean of Canadian science fiction" by The Ottawa Citizen and "just about the best science-fiction writer out there these days" by The Denver Rocky Mountain News — is one of only eight writers in history (and the only Canadian) to win all three of the science-fiction field's top honors for best novel of the year: