I have just released a new edition of the ebook version of my first collection, Impossibilia. Unlike the hardcover editions and the first ebook edition from PS Publishing, this edition contains story afterwords and notes, as well as excerpts from other stories, plus an excerpt from my upcoming novel, The Wolf at the End of the World.  This edition is also a lot cheaper at $3.99. Plus it still features that great cover art by Fernando Molinari. 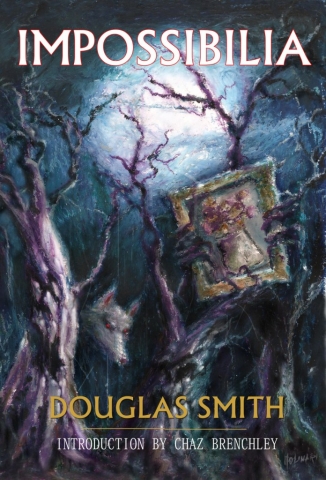 Here are a bunch of different buying links for the new ebook edition:

​And if you're interested in one of the print editions, here are they buying links for those, including how to request a signed personalized print edition from me directly:

Impossibilia was a finalist for the 2009 Aurora Awards for best long form work. With an introduction by award-winning UK fantasy and mystery writer, Chaz Brenchley, Impossibilia contains three novelettes, "A Bouquet of Flowers in a Vase, by Van Gogh" (which was an Aurora Award finalist in 2009), "Going Down to Lucky Town," and my award-winning novelette, "Spirit Dance," the story on which my upcoming novel is based.

"There are three stories in this collection, and they reach from van Gogh's rural France to the classic travelling fair to the far lost forest, and from timeshift to shapeshift to the activity of luck. That's range, or at least a glimpse of range, in the grand manner that harks back to Bradbury and Sturgeon and Ellison; that's the freedom that the short form allows, the humming-bird's brief attention at this flower and at this one and at that...

However it dresses, literature has its great themes – love and death, largely – and its lesser themes, and they mirror the natural concerns of life. Which is why, whatever the setting and whatever the mood, Doug Smith's stories turn inward, on their characters. Not always in a kindly way – fiction is necessarily ruthless, or else it degrades into sentimentality – but these are none the less stories that treat with hope, and will not in the end deny it. Dues are paid, and life goes on: reaching, purposeful, intent."

From the cover flap:

We all have things we hide away inside—secrets, fears, aspects of ourselves we keep locked away. Or try to.

In that respect, the characters we meet in Douglas Smith's Impossibilia are like any of us. They have things inside them too. Only their things are a little... different.

A dead wife that won't leave. A wolf. The secret to being the luckiest man alive.

In 'Bouquet of Flowers in Vase, by van Gogh', remote viewing drives a search through the past for lost masterpieces. An ex-CIA agent, haunted by the presence of his dead wife, falls in love with a beautiful remote viewer with her own secret. But can viewing the past change the present?

Cree Indian legends, a love triangle, a covert government agency, and shape shifters collide in the award-winning 'Spirit Dance', described in Challenging Destiny as "...a vivid and wonderfully written tale about Native Canadian spirits, in the vein of Thomas King."

In 'Going Down to Lucky Town', an itinerant gambler chases a streak of luck across the country, while trying to win back the love of his daughter. The secret he finds forces him into an ultimate gamble for the highest stakes of all: his daughter's life.

And through all the stories, these characters share one more thing beyond what they hold inside. In the decisions they face, in the choices they make, they do what they do out of love. Lost love, found love, the love of a child. But love. So maybe they aren't that different from us after all...

Read more about Impossibilia here, including reviews and excerpts from the stories.